Answers to questions about implantation of embryos after in vitro fertilization

What is involved in embryo implantation?

When does blastocyst implantation actually occur after an IVF cycle – or in a normal menstrual cycle?

How long does embryo implantation take?

What is the latest chance for implantation of an embryo after an IVF transfer?

What percent of IVF embryos will implant?

The rate of embryo implantation varies according to multiple factors including the quality of the IVF program and female age. The graph below shows national average implantation rates from the 2012 CDC IVF report from the US government.

Implantation rate is defined as the percentage of embryos that were transferred that develop at least to the stage of fetal heart activity documented by pregnancy ultrasound. 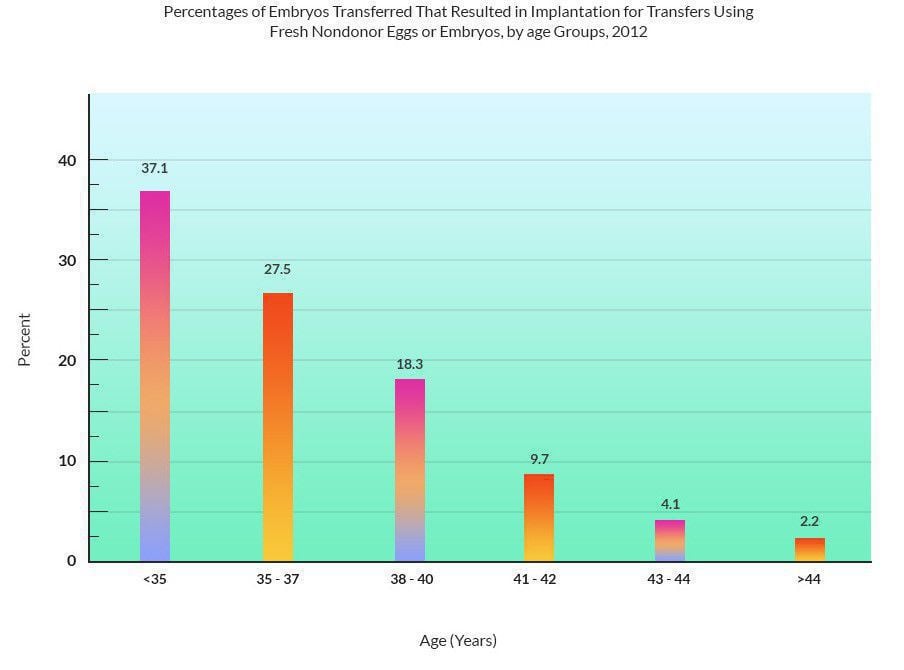 Is there such a thing as “late implantation” after IVF?

There seems to be some variation in the timing of implantation, based on blood levels of the pregnancy hormone (hCG) and variations in ultrasound development at 4 to 6 weeks of pregnancy.

However, in humans there is not much leeway for late implantation because the “window of implantation” closes.

What is the cause of late implantation of an embryo in humans?

We don’t know much about this. It could be due to slower than average embryo development or late development of uterine receptivity – or a combination of factors.

How can we improve implantation rates with IVF?

IVF failure seems to be due to issues with embryo quality and not uterine issues in the large majority of cases. Part of the evidence for this comes from egg donation success rates that are excellent – even in couples that have failed IVF repeatedly using their own eggs.
Do hormones affect implantation?

In order to be receptive, the uterine lining needs to be exposed to the ovarian steroid hormones estrogen and progesterone in sufficient amounts and with proper timing.

After fertilization the human embryo begins a 4 day long journey down the fallopian tube and into the uterus.

When the embryo reaches the blastocyst stage it develops two distinct populations of cells. The outer cell mass, called the trophectoderm, and the inner cell mass. There is also a fluid filled cavity – as seen in the picture below. 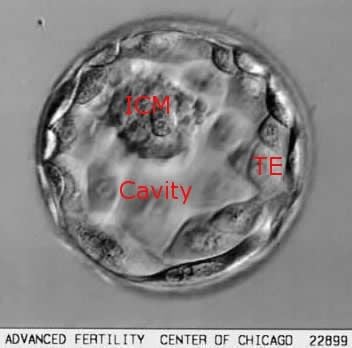 A healthy blastocyst embryo will continue to expand and the trophectoderm then begins to hatch out of the embryo’s shell. Hatching usually occurs on day 6 in humans. See the picture below. 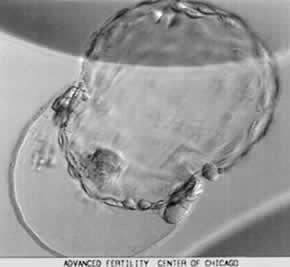 The process of embryo implantation is described as having three phases:

Apposition is “unstable adhesion” of the blastocysts to the surface of the uterine lining.

The attachment phase involves “stable adhesion”. This phase is believed to involve signaling back and forth between the embryo and the lining.

The penetration phase involves invasion of the trophectoderm cells from the embryo through the surface of the lining deeper into the stroma of the uterine lining. In this way, a vascular connection to the mother is formed.

Timing of embryo implantation in humans

A good study of implantation was published in 1992 by Bergh & Navot. They studied 33 pregnancies from egg donation or frozen-thawed cycles (FET) with serial blood HCG levels on the mothers to find the time of the “first embryonic signal”. The HCG assay used could detect very low levels of HCG – the pregnancy hormone.

What is the “window” of implantation?

After sufficient estrogen hormone exposure, initiation of progesterone hormone starts a “clock” – and the uterine lining passes through a receptive “window” of time when implantation can occur. Before, or after this window – implantation can not occur.

Rosenwaks et al, in 1987 published a study looking at donor embryo transfers done in natural cycles. They got good results when transferring 4-6 cell embryos with day 17-19 endometrium (the day of the LH surge was called day 14).

Formigli et al, in 1987 reported uterine lavage of embryos from uteri of donors at 5 days post-ovulation. The embryos were then transferred to recipient women. They had pregnancies when the recipient’s cycle was from 4 days in front of to 3 days behind the donor’s uterus at ovulation. This suggests a window of implantation of up to 7 days.

Navot et al, in 1991 reported on donor embryo transfers done with 2-3 day old embryos on recipient “cycle days” 15-20 (artificial cycles controlled with meds). Pregnancies resulted from transfers on all days. This suggests a window of at least 6 days.

The inferred window of implantation may extend from day 18 to day 24 of an idealized cycle.

Implantation in some other mammals

There are some very interesting variations among different mammalian species.

Ovulation – mating – fertilization – and subsequent development to the blastocyst stage occurs. The blastocyst then remains in the uterus without implanting or developing further.

In some species, the corpus luteum cyst in the ovary is later reactivated – at which time the embryo implants and continues development.

The swamp wallaby, a marsupial, is a good example:

Dr. Mohamad Irani is a reproductive endocrinologist and infertility specialist.