In cases of relatively minor tubal damage it can be difficult to be certain that the infertility problem is solely due to the tubal damage. There may be other significant contributing causes that are resulting in the problem conceiving.

In general, the standard infertility testing is performed on all couples and if no other cause of infertility is found, the presumptive diagnosis can be tubal factor. However, if the degree of tubal scarring is very minimal, a diagnosis of unexplained infertility could be warranted.

As IVF success rates have improved dramatically over the last 20 years, IVF has become the mainstay of treatment for tubal infertility. More details about in vitro fertilization pros and cons for tubal problems are below on this page. 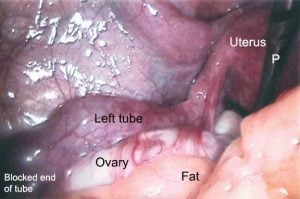 Pelvic inflammatory disease is usually caused by invasion of either gonorrhea or chlamydia from the cervix up to the uterus and tubes. The infection in these tissues causes an intense inflammatory response. Bacteria, white blood cells and other fluids (pus) fill the tubes as the body combats the infection.

Eventually, the body wins and the bacteria are controlled and destroyed. However, during the healing process the delicate inner lining of the tubes (tubal mucosa) is permanently scarred. The end of the tube by the ovaries may become partially or completely blocked, and scar tissue often forms on the outside of the tubes and ovaries.

All of these factors can impact ovarian or tubal function and the chances for conception in the future. If pelvic inflammatory disease is treated very early and aggressively with IV antibiotics, the tubal damage might be minimized, and fertility maintained.

A published study of 745 women with one or more episodes of PID that attempted to conceive showed that 16% of the women were infertile from tubal occlusion. Of those that conceived, 6.4% had ectopic pregnancies.

Learn about pregnancy after ectopic pregnancy

Hysterosalpingogram
The diagnosis of tubal factor infertility is initially investigated in most cases with a hysterosalpingogram. This is an x-ray examination performed in a radiology department in which contrast material (dye) is injected through the cervix to the uterine cavity. If the fallopian tubes are open the dye flows into the tubes and then spills out to the abdominal cavity. This is documented with x-ray pictures during the procedure.

However, just because the fallopian tubes are found to be open by this “plumbing” test this does not mean that tubal function is normal. The inside lining of the fallopian tube can be severely damaged even though the tube is open and dye spills into the abdominal cavity on the hysterosalpingogram.

Open but scarred tubes may not be able to perform the necessary functions to result in establishment of a normal pregnancy. Proper tubal function allows egg pickup and transport, fertilization, and embryo transport from the fallopian tube down into the uterus where the embryo implants.

If egg pickup, transport, and fertilization occur properly, but the tubal damage does not allow proper transport of the embryo to the uterus, implantation may occur in the tube resulting in a tubal pregnancy.

Other methods of detecting tubal damage

Laparoscopy can be performed to diagnose tubal damage other than complete tubal blockage.

Tubal catheterization utilizing a special scope can be done to assess the status of the mucosal lining of the inside of the tubes. This is very rarely done.

The treatment for tubal factor infertility is usually either tubal surgery to repair some of the damage or in vitro fertilization (IVF).

Pros and cons of surgery versus IVF for tubal infertility

The decision to have one of these therapies for tubal infertility should be based on several factors which your reproductive endocrinologist (fertility specialist) should discuss with you.

The most significant issues are success rates, the degree of tubal damage, the age of the female, and whether other infertility factors (male or female) are present.

Learn about costs of in vitro fertilization

Some considerations regarding tubal surgery vs. in vitro fertilization IVF are listed below:

In vitro fertilization for tubal infertility

In vitro fertilization is a treatment option that bypasses the tubal problem instead of attempting a repair.

With in vitro fertilization, sperm and eggs are mixed together in the laboratory and then the resulting embryos are transferred to the woman’s uterus.

Success rates with in vitro fertilization for tubal factor infertility in women under 39 years old are usually very good because these women are relatively unlikely to have additional infertility problems.