What is a hysterosalpingogram?

A hysterosalpingogram, or HSG is an important test of female fertility potential. The HSG test is a radiology procedure usually done in the radiology department of a hospital or outpatient radiology facility.

This shows whether the fallopian tubes are open or blocked and whether a blockage is at the junction of the tube and uterus (proximal) or at the other end of the tube (distal). 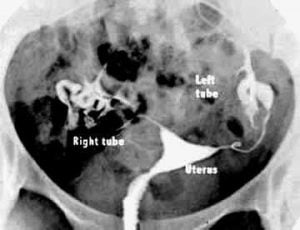 What else can be seen by a hysterosalpingogram, besides whether the tubes are open?

Other things that can be seen on a hysterosalpingogram include:

What to expect during a hysterosalpingogram

The hysterosalpingogram study only takes about 5 minutes to perform. However, the test is usually done in the radiology department of a hospital so there is additional time for the woman to register at the facility and fill out a questionnaire and answer questions regarding allergies to medication etc. The way the test is done is the following:

Does having a dye test improve the chance for getting pregnant?

Pregnancy rates in several studies have been reported to be very slightly increased in the first months following a hysterosalpingogram. This could be to the flushing of the tubes opening a minor blockage or cleaning out some debris that was preventing the couple from conceiving.

Complications associated with a hysterosalpingogram include the possibility of an allergic reaction to the dye, which is uncommon. This usually causes a rash, but can rarely be more serious. Pelvic infection or uterine perforation are also possible complications, but these are very uncommon.

If a woman has multiple sexual partners or is otherwise at risk for sexually transmitted diseases, she might be screened with cervical cultures before doing an HSG. Some physicians prescribe several days of antibiotics to reduce risk of infection after HSG. 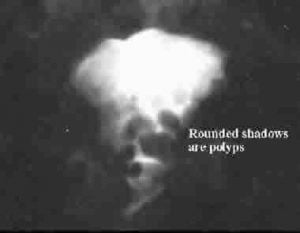 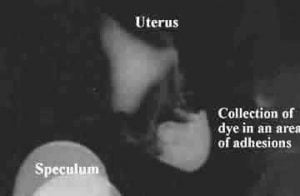 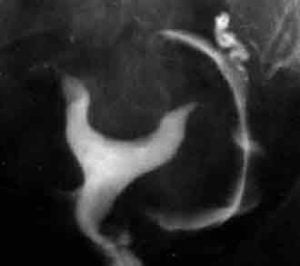 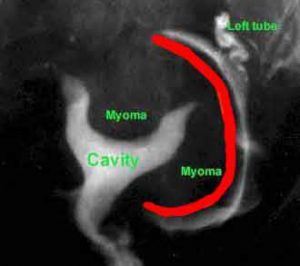 Hysterosalpingogram picture showing uterus with a fibroid that is pushing in to the cavity Another fibroid on the outside of the uterus is circumscribed by dye along the red line Fibroids inside the cavity can cause infertility, miscarriage or preterm birth