What is PGS, preimplantation genetic screening?

Many human embryos are chromosomally abnormal

Several studies have shown that overall about 50% of human preimplantation embryos from IVF are chromosomally abnormal. The rate of abnormalities is affected greatly by female age, as shown in the graph below. Chromosomes in eggs from older women have a significantly increased rate of abnormalities. 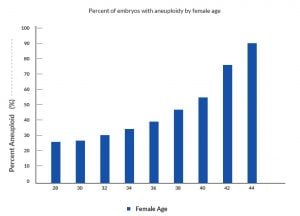 What to do if the first IVF attempt fails

Problems in the past with aneuploidy screening of IVF embryos

IVF and PGS for aneuploidy (an abnormal number of chromosomes) has been used at some clinics in the United States since the mid 1990s. However, studies showed that performing embryo biopsy on day 3 and performing the genetic analysis using FISH technology (fluorescent in situ hybridization) did not result in an increase in the chance for the patient to have a successful IVF cycle.

There were 2 main problems with that approach.

Sometimes, after repeated failure to implant any embryos with IVF, women will say;

Advances in the field have led to utilization of improved genetics technologies that allow assessment of all 23 pairs of chromosomes.

There are currently 4 technologies that can be utilized for assessment of normality of all 23 chromosomes:

Comparative Genomic Hybridization (often referred to as CGH, or aCGH) is a microarray technology that is often used now instead of the older and far less comprehensive FISH. With microarray CGH, the actual DNA in the embryo is compared to a known normal DNA specimen utilizing thousands of specific genetic markers. This gives a more accurate result, with far fewer false normal or false abnormal results.

Some studies have determined that the error rate using array CGH technology is about 2%. FISH has an error rate of about 5-10%. Additionally, many other abnormal embryos would be reported by FISH as normal because the abnormality was in a chromosome that was not part of the FISH panel being used.

Next Generation Sequencing (NGS) is a newer technology that has been increasingly utilized for testing IVF embryos since about 2015. NGS appears to be better at detecting smaller segmental changes compared to aCGH. It is also thought to be better at detecting partial aneuploidy and small unbalanced translocations. Mosaicism is probably more likely to be discovered using Next Generation Sequencing.
Improvements in embryo biopsy techniques

Trophectoderm biopsy is done at the blastocyst stage on day 5 and 6. At this stage there are many more cells present in the embryo. This allows multiple cells to be removed from the trophectoderm (precursors to the placenta). The inner mass cells (precursors to the fetus) can be left undisturbed during the biopsy.

With trophectoderm biopsy, about 5 cells are snipped off for the genetic testing. This does not significantly weaken the embryo because it has about 70-150 cells at this stage.

The combination of these two modifications (advanced genetics and trophectoderm biopsy) has led to significantly improved pregnancy success rates for patients that want to utilize PGS for their IVF treatment.

Some clinics in the US have been using trophectoderm biopsy and the newer genetics technologies to screen embryos in some IVF patients. The results seen in some IVF programs (including ours) have been very promising.

There is some interesting speculation that the uterine lining could be less receptive during a stimulated cycle as compared to the controlled or “artificial” embryo replacement cycle.

Which couples should we be offering aneuploidy screening to?

Another issue is cost. PGD costs in the US vary from about $3000-$9000 plus all other associated IVF costs. There are PGD related costs associated with the embryo biopsy procedure itself and there are also costs involved for the genetics laboratory performing the chromosomal analysis on the cells.

PGD costs at our center

Which are the best PGD clinics?

In general, the best clinics for PGD or PGS will be the clinics with the best IVF success rates. It is critical to have an excellent culture system in order to get a maximal number of quality blastocysts for biopsy.