The Effect of Endometriosis on Fertility and Infertility

The endometrium is the tissue that lines the inside of the uterine cavity.

Endometriosis is a disease state in which some of this tissue has spread elsewhere – such as to the ovaries, or elsewhere in the abdominal cavity.

Endometriosis causes pain in some women and can also cause infertility.

5-10% of all women have endometriosis. Most of these women are not infertile.

30-40% of infertile women have endometriosis.

The only way to be sure whether a woman has endometriosis is to perform a surgical procedure called laparoscopy that allows us look inside the abdominal cavity with a narrow scope.

Sometimes we strongly suspect that the disease is present based on the woman’s history of very painful menstrual cycles, painful intercourse, etc., or based on the physical examination of the woman or ultrasound findings. 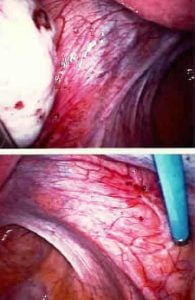 Endometrioma in ovary seen with ultrasound 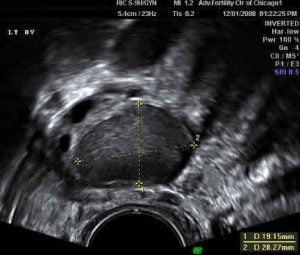 This endometrioma is 19 by 28mm diameter, as measured at the yellow cursors
Normal ovarian tissue is seen above it and to the left in this image
This patient has severe endometriosis and needed IVF to get pregnant

The large majority of cases of endometriosis are mild.

Women with any stage of endometriosis (mild, moderate, or severe) can have severe lower abdominal and pelvic pain – or they might have no pain or symptoms whatsoever.

Severe endometriosis causes pelvic scarring and distortion of pelvic anatomy. The tubes can become damaged or blocked and the ovaries often contain cysts of endometriosis (endometriomas) and may become adherent to the uterus, bowel or pelvic side wall. Any of these anatomic distortions can result in infertility.

In some cases the eggs in the ovaries can be damaged, resulting in decreased ovarian reserve and reduced egg quantity and quality.

Treatment for endometriosis associated with infertility needs to be individualized for each woman. There are no easy answers, and treatment decisions depend on factors such as the severity of the disease and its location in the pelvis, the age of the woman, length of infertility, and the presence of pain or other symptoms. Some general issues regarding treatment are discussed below.

Medical (drug) treatment can suppress endometriosis and relieve the associated pain in many women. Surgical removal of lesions by laparoscopy might also reduce the pain temporarily.

However, several well-controlled studies have shown that neither medical or surgical treatment for mild endometriosis will improve pregnancy rates for infertile women as compared to expectant management (no treatment).

There are a few more recent studies that did show a benefit to surgical treatment of mild endometriosis. This is interesting because previous studies have shown no benefit.

For treatment of the infertility associated with mild to moderate endometriosis, controlled ovarian hyperstimulation with intrauterine insemination – IUI is often attempted and has a reasonable chance to result in pregnancy if other infertility factors are not present.

If IUI is not successful by about 3 cycles, in vitro fertilization should be considered.

Several studies have shown that medical treatment for severe endometriosis does not improve pregnancy rates for infertile women.

Some OB/GYNs and fertility doctors advocate medical suppression with a GnRH-agonist such as Lupron, Synarel, or Zoladex for up to 6 months after surgery for severe endometriosis before attempting conception.

Although at least one published study found this to improve pregnancy rates as compared to surgery alone, other studies have shown it to be of no benefit
This is one of the issues regarding endometriosis for which there is not universal agreement among infertility specialists
Unfortunately, the infertility in women with severe endometriosis is usually resistant to treatment with ovarian stimulation plus intrauterine insemination. If the pelvic anatomy is very distorted, artificial insemination is unlikely to be successful. These women often require in vitro fertilization in order to conceive.

Although the studies of in vitro fertilization for women with severe endometriosis do not all show similar results, pregnancy success rates are usually good if the woman is relatively young (under 40) and if she produces enough eggs during the ovarian stimulation.

IVF failed – what to do next after a failed cycle in order to have success with the second IVF attempt?