Definition of a blastocyst: 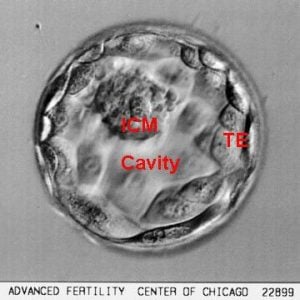 Our IVF clinic and many others that do blastocyst culture and transfer use a blastocyst scoring system originally developed and published by Dr. David Gardner in the late 1990’s. Dr. Gardner is well known for being first to develop a commercially available embryo culture media system that supported high rates of viable blastocyst development. There are other grading systems for blastocysts, but this one is most widely used.

Blastocysts are given a quality grade for each of the 3 components and the score is expressed with the expansion grade listed first, the inner cell mass grade listed second and the trophectoderm grade third.

For example, a blastocyst quality grade of 4AB means that the blastocyst is expanded (grade 4), has many tightly packed cells in the inner cell mass (grade A), and has a trophectoderm with few cells forming a loose epithelium (grade B). See the examples of blastocyst grading pictures below.

There are other blastocyst grading systems, including the grading that we use in our IVF program (see below). Some use more letter grades than the Gardner system. For example, some clinics give component cells grades of D or even E in addition to the A, B and C grades described above.

We have seen records from some labs that give blastocysts a single letter grade, and no number at all. For example the blasts are simply graded as A’s or B’s or C’s, etc. This system is easier for lab personnel to deal with but at the cost of being less descriptive. There is also some loss of correlation between grading of the blastocysts and expectations for successful pregnancy outcome.

Blastocyst embryo grading is helpful. However, the potential of the embryo to continue normal development, implant and result in a healthy baby born is difficult to predict based on grading alone.

Assessment of an embryo’s chromosomal status using preimplantation genetic testing for aneuploidy (PGT-A) along with standard morphology grading is the current gold standard for selection of the “best” embryo for transfer. 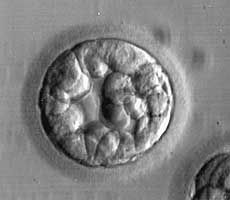 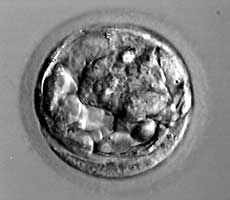 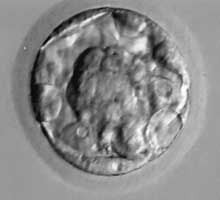 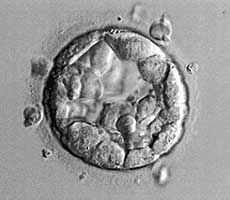 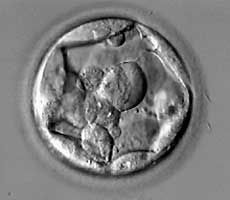 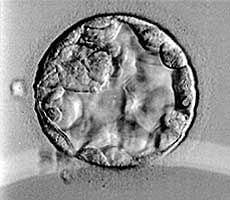 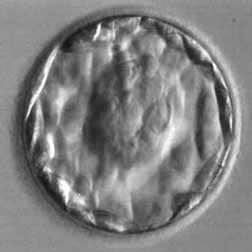 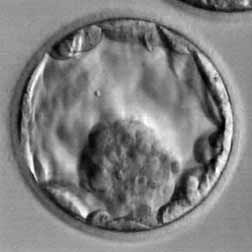 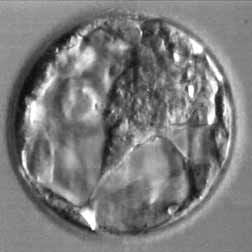 It is almost completely hatched out of its shell (seen at lower left of image).
After a blastocyst hatches, it begins to invade into the uterine lining to “implant”.
This embryo has a quality grade of 5AA (inner cell mass seen at the bottom is out of the plane of focus).
The dark areas at the top and lower right of the photo are shadows in the drop of culture media.

A healthy blastocyst will implant within one to four days following a day 5 transfer, with invasion of the cells into the uterine lining occurring soon after blastocyst hatching.

Our blastocyst grading system at the Advanced Fertility Center of Chicago