How to get pregnant after your tubes are tied

How to get pregnant after your tubes are tied

Bundled price for tubal reversal of $9,000, including our fees, the surgery center and anesthesia.

Women who have had tubal ligations sometimes regret their decision and desire fertility in the future. There are 2 options for fertility after tubal ligation, tubal reversal surgery and in vitro fertilization – IVF. Both of these are reasonable options and how the woman chooses to proceed should be based on an educated consideration of the pros and cons of each.

Most women have their tubes tied before they leave the hospital after they deliver a baby, or they come in for tubal ligation by laparoscopy which is an outpatient surgical procedure done through a scope that goes through the belly button.

Tubal reversal surgery usually requires a laparotomy which is a much larger incision on the abdomen usually approximately 4 to 6 inches in length. Since the skin and all the muscles and other tissues of the abdominal wall must be cut through there is considerably more discomfort and a much longer recovery time following the surgery as compared to a laparoscopic surgery such as with a tubal ligation.

Some surgeons are now performing tubal reversal surgeries through the laparoscope. However, this is a relatively difficult technique and there is not yet sufficient published data to know what pregnancy rates will be after laparoscopic tubal reversal.

There are 5 important issues regarding tubal reversal surgery that need to be considered and discussed. The sperm quality of the male partner, tubal status, status of other possible pelvic conditions, female age, and egg quantity and quality.

The length of the remaining tubal stumps after tubal ligation (or cauterization if the tubes were burned instead of tied or clipped) is very important. The longer the 2 remaining stumps are on each side the better the chances for successful reversal and pregnancy. The shorter the stumps the lower are the chances for pregnancy.

Unfortunately, it can not be known how much tube is remaining for certain without surgery. A hysterosalpingogram (dye test in radiology) can tell us how long the proximal stump is (the piece of tube attached to the uterus) but the dye test will not tell us anything about the length of the distal stump (the far end of the tube that has been separated from the uterus).

Some women go through tubal reversal surgery with very short tubes. This results in low chances for subsequent pregnancy.

The fimbria are delicate, fluffy structures at the end of the tube that “pick up” the egg when it is released from the ovary at the time of ovulation. If the fimbriated end of the tube is damaged or has been removed, chances for success with reversal are low. 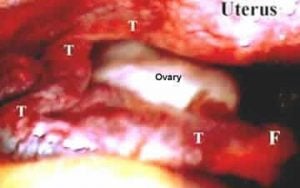 If both portions of fallopian tube are significant long (sometimes they are quite short), the fimbria are in good condition, and the surgery is done expertly, the expected pregnancy rate in young women (under 35) without other fertility problems (male partner also has good sperm quality) should be about 75%.

This means that after 1 year of trying 75% of women should be able to get pregnant if the tubal anatomy was good and these other factors are all normal. If any of these factors are abnormal, expected pregnancy rates after tubal reversal would be significantly lower.

Status of any other pelvic conditions

Pelvic endometriosis or any scar tissue in the area of the tubes or ovaries would be expected to reduce the chances for success after tubal reversal surgery. However, IVF pregnancy success rates are generally not affected by these conditions. Therefore, in vitro fertilization is probably a better option in women with significant endometriosis or pelvic scar tissue.

Chances for pregnancy with either tubal reversal or IVF decline in the mid to late 30’s and more dramatically starting at about age 38. By age 43-44, very few women will be able to have a baby using either approach. This issue makes careful and honest counseling very important for women between about 35 to 43 years of age.

I would discourage women 43 and older from pursuing either option because of the dismal success rates at that age and beyond. Egg donation is a more viable option iat that age.

Some women have a decline in either egg quantity or quality earlier in life than expected. Therefore, the woman’s “ovarian reserve” should be tested before a decision is made regarding whether to proceed with either tubal reversal or in vitro fertilization. Ovarian reserve is usually assessed by an ovarian antral follicle count, ovarian volumes and day 3 FSH levels.

The biggest advantage of tubal reversal surgery over IVF is that once the women has gone through the surgery she hopefully will not need any intervention through a physician such as drugs, medications or procedures in order to get pregnant. Obviously, the idea is that good old fashion sex will then give them the baby that they want.

There is also very low risk for multiple pregnancy – twins occur naturally in only 1 in 90 pregnancies. The biggest disadvantage is the fact that the women has to go through a big surgery and if pregnancy does not result after the tubal reversal her only option remaining is in vitro fertilization.

A small disadvantage is that after she has her additional child (or children), she will need to use contraception or have her tubes (or her male partnerâ€™s) tied again.

In vitro fertilization involves stimulating the woman with medications, taking a number of eggs from her ovaries, fertilizing them with her male partners sperm and transferring some of the resulting embryos back into her uterus with the hope that one will implant. There is detailed information elsewhere on this site about in vitro fertilization.

The biggest advantage of in vitro fertilization is that the woman can avoid avoids the major surgery involved with a tubal reversal. Another advantage is that the outcome is known 10 days after the procedure when we do the first pregnancy test rather then waiting for a year or more to find out whether the procedure is successful.

Success rates with IVF vary greatly according to the program. Some IVF programs have pregnancy rates with tubal factor infertility of over 50% per attempt in women under 40 years old. Other programs with the same type of patients report pregnancy rates of only 20 to 30% (or sometimes less).

The biggest disadvantages of in vitro fertilization are that the woman has to take medications to stimulate development of multiple eggs and that there is always some risk for multiple pregnancy.

The biggest disadvantages of in vitro fertilization are that the woman has to take medications to stimulate development of multiple eggs and that there is always some risk for multiple pregnancy.

However, multiple birth risks can be controlled by limiting the numbers of embryos transferred to 1 (or 2). Another disadvantage is that if the first attempt does not work the couple must do IVF again. Often there would be left over embryos that were frozen from the first cycle – it is much less expensive and easier for a second attempt using the frozen embryos. However, if there are not any frozen embryos, the cost for the second attempt is usually the same as for the first one.

Physician charges for tubal reversal surgery and for IVF vary greatly across the country. Most physicians charge a professional fee of somewhere between $3000 and $8,000 for the tubal reversal surgery. On top of this will be hospital charges which are usually between $7,000 and $20,000. Insurance will rarely pay any of these charges.

IVF costs between about $7,000 and $17,000 plus medications depending on the program. Medication costs vary according to the amount needed for the individual woman, but average about $2500 – $3000 for the cycle.

Women that have had tubal ligations often ask us:

“What is the best way for me to have another baby, should I do IVF or should I have the tubal reversal surgery?”

I do not believe that there is a “best” way. The best way to try to have another baby for an individual woman is up to her. She needs to learn about the pros and cons of both approaches and then consider risks, benefits and costs involved with each one.

Having said all of this, very few women come in asking for reversal surgery anymore. They almost always have read about both options and want in vitro fertilization. The OB/GYN physicians are most often telling them to go for IVF as well. If we had a crystal ball that would tell us what, if anything, would get the couple a baby it would be easy to decide.

If anyone has such a crystal ball for sale, please call me immediately. I will pay very well for it…

For more information about details regarding tubal reversal surgery and IVF, there are many other pages on this website related to both tubal surgery and in vitro fertilization.