What is PGT, or preimplantation genetic testing?

Preimplantation genetic testing (PGT) is the process of removing a cell from an in vitro fertilization embryo for genetic testing before transferring the embryo to the uterus.

The term PGT is often loosely used to refer to any testing performed on an embryo prior to it being transferred to the uterus. There are actually three distinct types of PGT:

PGT-M/PGD involves removing a cell from an IVF embryo to test it for a specific genetic condition (cystic fibrosis, for example) before transferring the embryo to the uterus. PGT-A/PGS is the proper term for testing for overall chromosomal normalcy in embryos. PGT-A/PGS is not looking for a specific disease diagnosis – it is screening the embryo for normal chromosome copy number. PGT-SR looks for structural abnormalities in the embryo’s chromosomes.

IVF, in vitro fertilization, was first successfully used in 1978. It was not until years later that scientists began tinkering with the possibility for extracting one or more cells from the embryo to get information about the potential health of the child that might result following implantation of that embryo.

The first report of pre-implantation genetic testing in humans with a pregnancy resulting was published in 1990. Major improvements in these technologies have been developed since then. Both the embryo biopsy techniques as well as the genetics technologies used on cells removed from embryos have improved dramatically.

Much has been learned in the PGT/PGD/PGS field over the past 20 years – and much remains to be learned.

How are embryos biopsied?

There are 3 basic stages at which eggs or embryos are biopsied at the present time.

With trophectoderm biopsy at the blastocyst stage, a small hole is made in the shell of the embryo and several cells that are precursors to the placenta (trophectoderm) are removed for testing. This technique has shown excellent results in many US IVF programs, including ours. It is now considered by many experts to be the biopsy method of choice for PGT/PGD/PGS.

Another issue is cost. PGT/PGD/PGS costs in the US vary from about $3000-$9000 plus all other associated IVF costs. There are PGT/PGD/PGS related costs associated with the embryo biopsy procedure itself and there are also costs involved for the genetics laboratory performing the chromosomal analysis on the cells.

Which are the best PGT clinics?

In general, the best clinics for PGT/PGD/PGS will be the clinics with the best IVF success rates. It is critical to have an excellent culture system in order to get a maximal number of quality blastocysts for biopsy. Also, the skills that lead to successful IVF are the same skills that facilitate blastocyst culture, embryo biopsy and blastocyst vitrification (freezing) and successful frozen-thawed embryo transfers. Check the CDC and SART sites to find an IVF clinic in your area with a good volume of cases and high success rates. Then make sure that they have been doing trophectoderm biopsies. Come to our clinic for IVF and PGT/PGD/PGS.

When one or both partners in a couple are carriers of the genetic mutation that could lead to a serious medical condition in the child, in vitro fertilization and preimplantation genetic diagnosis testing can be performed on their embryos.

In past years couples that carried a genetic mutation could choose between not having children or having prenatal testing done with either amniocentesis at about 16 to 18 weeks of pregnancy or with chorionic villus sampling at about 11 to 12 weeks to see if the baby was affected with the genetic condition. The couple then has the option of terminating the pregnancy if the baby is affected with the disorder.

Now couples that are carriers for genetic diseases have the option of having IVF and PGT-M/PGD to screen their embryos prior to transferring them to the uterus.

There are over 1000 single gene disorders that have been identified at the present time. Many of these disorders are very rare. However, some are so common in certain ethnic groups that routine screening to check whether someone is a carrier is recommended prior to getting pregnant. This is often referred to as carrier genetic testing (or screening).

The most common single gene disorders that PGT-M/PGD has been used for are:

However, there are hundreds more genetic diseases that can have single gene testing done using IVF and PGT-M/PGD. A partial list of relatively common single gene diseases is below.

What is PGT-A, or preimplantation genetic testing for aneuploidy?

Many human embryos are chromosomally abnormal

Several studies have shown that overall about 50% of human preimplantation embryos from IVF are chromosomally abnormal. The rate of abnormalities is affected greatly by female age, as shown in the graph below. Chromosomes in eggs from older women have a significantly increased rate of abnormalities. 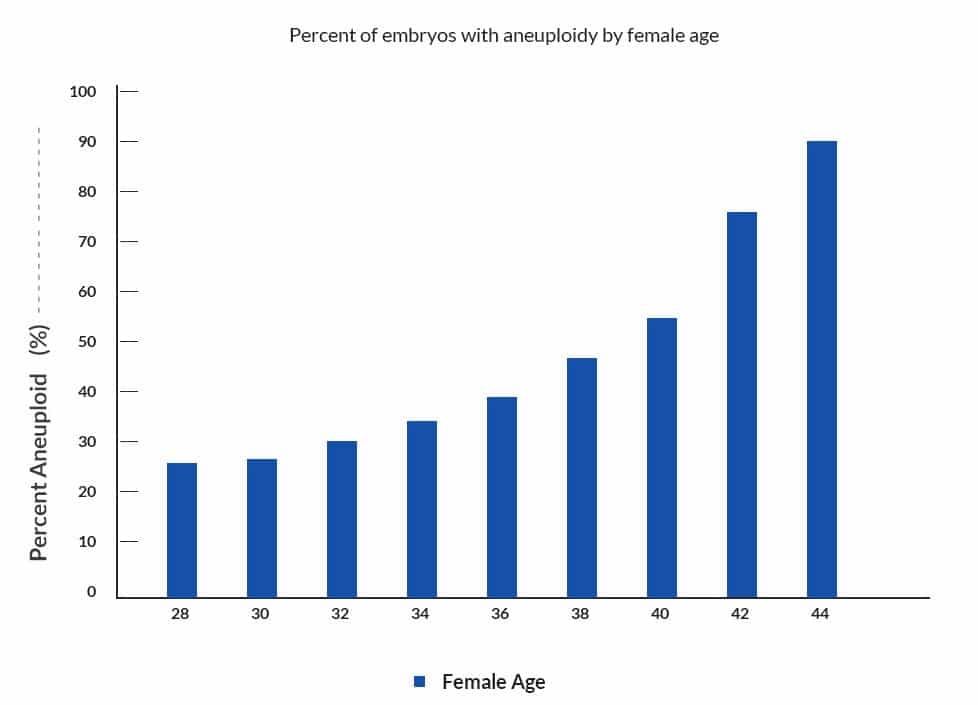 Problems in the past with aneuploidy screening of IVF embryos

IVF and PGT-A/PGS for aneuploidy (an abnormal number of chromosomes) has been used at some clinics in the United States since the mid 1990s. However, studies showed that performing embryo biopsy on day 3 and performing the genetic analysis using FISH technology (fluorescent in situ hybridization) did not result in an increase in the chance for the patient to have a successful IVF cycle.

There were 2 main problems with that approach.

Advances in the field have led to utilization of improved genetics technologies that allow assessment of all 23 pairs of chromosomes.

There are currently 4 technologies that can be utilized for assessment of normality of all 23 chromosomes:

Comparative Genomic Hybridization (often referred to as CGH, or aCGH) is a microarray technology that is often used now instead of the older and far less comprehensive FISH. With microarray CGH, the actual DNA in the embryo is compared to a known normal DNA specimen utilizing thousands of specific genetic markers. This gives a more accurate result, with far fewer false normal or false abnormal results.

Some studies have determined that the error rate using array CGH technology is about 2%. FISH has an error rate of about 5-10%. Additionally, many other abnormal embryos would be reported by FISH as normal because the abnormality was in a chromosome that was not part of the FISH panel being used.

Next Generation Sequencing (NGS) is a newer technology that has been increasingly utilized for testing IVF embryos since about 2015. NGS appears to be better at detecting smaller segmental changes compared to aCGH. It is also thought to be better at detecting partial aneuploidy and small unbalanced translocations. Mosaicism is probably more likely to be discovered using Next Generation Sequencing.

Trophectoderm biopsy is done at the blastocyst stage on day 5 and 6. At this stage there are many more cells present in the embryo. This allows multiple cells to be removed from the trophectoderm (precursors to the placenta). The inner mass cells (precursors to the fetus) can be left undisturbed during the biopsy.

With trophectoderm biopsy, about 5 cells are snipped off for the genetic testing. This does not significantly weaken the embryo because it has about 70-150 cells at this stage.

The combination of these two modifications (advanced genetics and trophectoderm biopsy) has led to significantly improved pregnancy success rates for patients that want to utilize PGT-A/PGS for their IVF treatment.

Some clinics in the US have been using trophectoderm biopsy and the newer genetics technologies to screen embryos in some IVF patients. The results seen in some IVF programs (including ours) have been very promising.

We are seeing substantially improved ongoing pregnancy rates in patients that are having trophectoderm biopsy performed at the blastocyst stage with subsequent freezing of their embryos.

A frozen thawed transfer cycle is done after the chromosomal analysis results come back.

There is some interesting speculation that the uterine lining could be less receptive during a stimulated cycle as compared to the controlled or “artificial” embryo replacement cycle.

Which couples should we be offering aneuploidy screening to?

PGT-A/PGS for patients that are carriers of chromosomal translocations

When the chromosomes in their sperm or eggs join with those of their partner in the fertilized embryo, they have a high percentage of chromosomal abnormalities.

What are some concerns with PGT/PGD/PGS?

If so many embryos have abnormal chromosomes, what is the risk for having a chromosomally abnormal baby for couples that do not have PGT-A/PGS with their IVF?

In the general population, the risk for a live birth with a chromosomal abnormality is:

The overall risk for a chromosomally abnormal live birth does not appear to be increased by having IVF or IVF with ICSI (intracytoplasmic sperm injection).

What else can be done to help couples to have a successful IVF outcome with a normal, healthy baby?

Grading of embryo quality in the IVF lab can help pick the chromosomally normal embryos for transfer. Embryos that are “graded” on the higher end of the scale have lower rates of chromosomal abnormalities as compared to those embryos that have lower grades.

Women that are of advanced reproductive age (such as 38 and older) will sometimes have chromosomal abnormalities in a very high percentage of their remaining eggs.

Rather than having IVF with PGT/PGD/PGS using their eggs, many of these women will need to do IVF with egg donation in order to have a successful pregnancy.

Because egg donors are young (usually under 30) and chromosomally abnormal eggs are much less common in young women, PGT/PGD/PGS is generally not used with donor eggs.

We are here to answer any questions or concerns you may have so that you feel completely confident when taking the first step toward building your family.