Clomid, or clomiphene citrate (generic), is a medication commonly used in women for the treatment of infertility. It is often used to induce ovulation in women that do not develop and release an egg (ovulate) on their own. Clomid is also used to stimulate extra follicles and eggs in the ovaries of women that already ovulate without medications.

How does Clomid work?

Clomid works as an “anti-estrogen” that tricks the brain into thinking that estrogen levels in the body are very low. It does this by binding to estrogen receptors in the brain and blocking the ability of estrogen to bind to those receptors. The brain then thinks that estrogen levels are very low so a process begins that increases release of follicle stimulating hormone (FSH). FSH is the hormone involved with stimulating development of mature follicles (egg containing structures) in the ovary.

Many women will have side effects when taking Clomid. Many of the side effects and adverse effects of clomiphene are brought about by its anti-estrogenic properties.

Psychological or emotional side effects are pretty common while taking Clomid. Approximately one fourth of women will have some negative psychological side effects with Clomid. They are often described as “severe mood swings” or “increased irritability”.

Hot flashes are sometimes experienced as a side effect of Clomid. These are similar to the hot flashes that menopausal women experience. They are annoying and are usually not severe enough to stop taking the medication.

Visual abnormalities such as seeing flashes or spots or having blurred vision are sometimes experienced. When these abnormalities occur Clomid should be discontinued.

Thinning of the uterine endometrial lining

Some women will have a thin uterine lining (endometrium) during Clomid treatment cycles. This is a result of the anti-estrogenic effect. During a natural menstrual cycle estrogen stimulates development of a thickened endometrium.

Because Clomid is anti-estrogenic it sometimes blocks the full developmental thickening process from occurring. We generally like to see in endometrial thickness of eight or more millimeters. However, sometimes the lining does not get thicker than 6 to 7 mm in Clomid cycles. 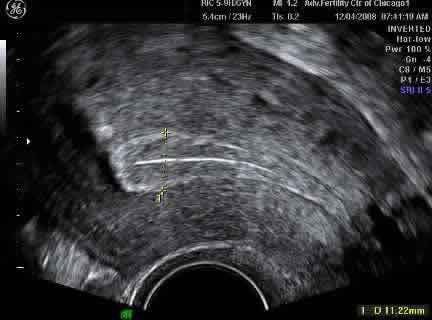 Another potential adverse effect of clomiphene is reduced production or cervical mucus. Estrogen stimulates production of clear, watery mucus by the cervical glands. In some women the anti-estrogenic properties of the medication will cause a decrease in mucus production and also thickened mucus.

Sperm are rapidly killed in the vagina and need to get into “good” cervical mucus so that they can survive and swim up into the tubes for a date with a friendly egg. It is believed that fertility is lower when cervical mucus production is significantly reduced.

However the negative influence of poor mucus is bypassed when couples use artificial insemination, IUI, instead of intercourse at the time of ovulation.

Other side effects of clomiphene

Abdominal discomfort, ovarian cyst formation and nausea are also sometimes seen as side effects of clomiphene use.

Long term side effects or harm caused by Clomid use

We do not know of any long term negative effects of Clomid use. Research is always ongoing in areas such as this.